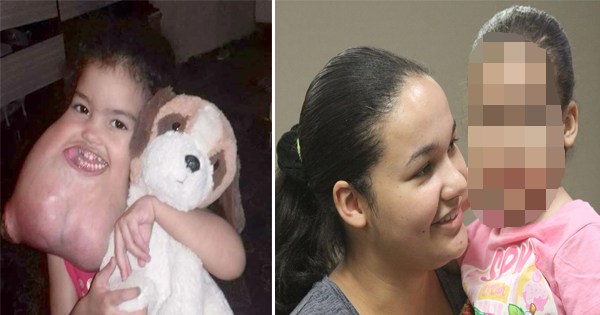 A 3-Year-Old Girl Nearly Suffocates To Death From The 5-Pound Tumor That's Growing On Her Face.

Melyssa Delgado was born with an incredibly rare tumor that slowly, but surely began to take over her entire face. Although the growth was benign, it was growing to the point where it was beginning to physically threaten her health.

Melyssa Delgado was born with an incredibly rare tumor that slowly, but surely began to take over her entire face. Although the growth was benign, it was growing to the point where it was beginning to physically threaten her health.

Melyssa Delgado, three, of Sao Paolo, Brazil, was born with a very rare, but thankfully benign, tumor called myxoma. This tumor grows in the body’s connective tissue, and for Melyssa, it had grown to such a point that it had taken over her jaw and was displacing her tongue.

The tumor made it difficult for the little girl to eat or breathe. And it showed no signs of slowing its progression.

Melyssa’s parents kept taking her to doctors and hospitals around Brazil, but none of the doctors there were willing to operate on her to remove the growth.

Left without any other immediate solution, the Delgado family put out a plea for help on social media, hoping that enough people would share it so that Melyssa’s story would eventually reach the computer of someone who could help them.

As they waited, the Delgado family desperately tried to save enough money to fly their entire family to America, where they hoped someone would be able to help them.

At long last, Melyssa’s story finally caught the eye of Dr. Celso Palmieri, an assistant professor of oral and maxillofacial surgery at Louisiana State University. He sent the video to his colleague, Dr. G.E. Ghali, who said, immediately that they would help.

“It was heartbreaking,” Dr. Ghali remembered. “She couldn’t even hold her head up the tumor was so huge. She could hardly swallow at all and she was beginning to have problems breathing. Her tongue was pushed all the way back to her throat,” he continues, “it was just a matter of time before this thing was going to suffocate her.”

Dr. Ghali not only promised to operate on Melyssa to save her life, but he also arranged to have the entire family flown into the States. Upon arrival, they would be provided housing and health care, and the entire procedure would be paid for.

On December 20, 2016, Dr. Ghali and his colleagues finally performed the life-changing surgery. Melyssa’s parents both cried upon seeing her for the first time post-op, and can’t express their thanks enough. “I really to thank everybody for what all of you did,” said Melyssa’s father. “We had been waiting for help for such a long time and in one month everything happened.”

The little girl will have to undergo future jaw reconstructing surgeries in the future, but the worst is now behind her.