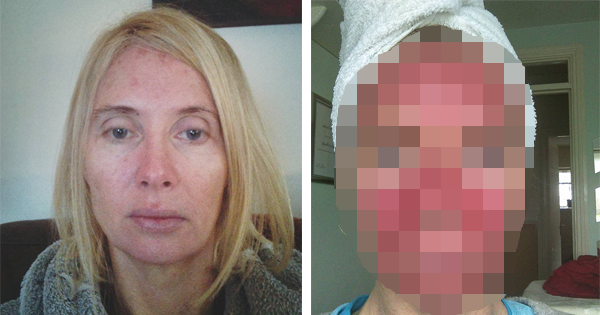 After Tanning For Years, She Drastically Damages Her Skin. This Is What It Looks Like When She Tries To Treat It Now.

For years, Mags Murphy had heard and read about all the dangers of tanning. She chose, however, to ignore this advice and continue tanning. Now, she’s paying the price.

45-year-old Mags Murphy didn’t think it would be a big deal to ignore the health advice of dermatologists and scientists who all spoke of the dangers of tanning. She thought it was merely advice, not words to actually be heeded.

It was only recently that Murphy went to the doctor and was told that many skin cells on her face were precancerous, due to all the years she’d spent tanning.

Murphy recently started the treatment – and she’s already seeing and feeling the effects.

As the days go by, and Murphy continues her treatment, the cream begins to cause redness to form in blotches across her face.

On day six, she says her skin “feels like [she] shaved [her] face with a dry razor.” On day nine, her face is hot, tight, and itchy.

By day 14, she wrote on her Facebook page, “My face is burning and throbbing today, my chin feels the worst, it's a little swollen and I'm sure something is going to erupt from under there.” The next day, the pain was so bad she felt like throwing up.

Just over halfway through the treatment, Murphy says her skin is slowly looking better – but she’s still in an incredible amount of pain.

She has yet to finish her treatment, but she’s hoping that her decision to share her treatment will “raise awareness to sun damage and using high factor sunlotion.”

“I heard all the warnings years ago and closed my eyes and ears to it all maybe someone will open their eyes to this if it's closer to home,” she finished.

You can continue keeping up with her treatment on her Facebook: