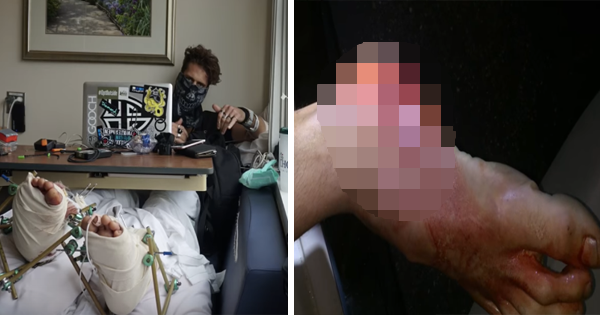 A daredevil YouTuber who goes by the username 8Booth made a grave miscalculation in the filming of his last video. We’ve included the clip of what happened, but we beg you to use viewer discretion before pressing play.

From just one glance at YouTuber 8Booth’s video channel, it’s obvious that the man has a taste for living life on the edge. Each of his videos features him doing an incredibly unsafe, potentially fatal party trick. He’s walked on incredibly high, narrow ledges and jumped from too many high places into bodies of water to count.

Each time, the man has, somehow, gotten out unscathed. This has only encouraged him to try progressively more dangerous stunts – and his viewers to further challenge him.

This past Sunday, everything went wrong.

8Booth set out to complete his eighth pool drop – where he launches himself off a high hotel balcony, into their swimming pool below – and didn’t quite make it as far as he needed to.

In past jumps, 8Booth has always managed to land into the center of the pool.

This time, he fell short.

Rather than make it into the pool, 8Booth slammed his feet onto the edge before falling into the water. “Both feet shattered as well as [heels],” he wrote in the caption of his video.

In the video, he includes several different angles of his jump from security footage from the hotel, as well as the footage from his GoPro camera.

At the end of the clip, he includes a photo of his injured feet, as well as himself sitting in a hospital bed.

In the wake of this video, people have been offering 8Booth moral support and well wishes for his recovery. Others, who had never agreed with his life-threatening decisions in the first place, offer snide commentary.