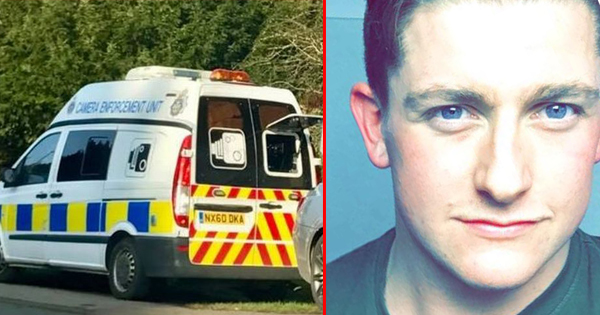 After A Squabble With The Cops, He's Finally Going To Get The 'Revenge' He's Been Waiting For Five Years--Using Only His Boot.

A man took the 'revenge' he was craving for five years after he decided to stand behind a police speeding van and helped motorists get by without getting a ticket. Read on for more details!

Chris Welford, 23 years old, can’t seem to forget the day he was given a speeding ticket five years ago. So, when he realized that there’s a mobile speed camera parked on the same road he was targeted on, Welford decided to take that opportunity, Gazette Live reports.

Welford parked his BMW a few inches behind a van of Cleveland Police. He then propped his boot up and blocked the van’s camera. He stood there looking like he was chilling for an hour.

Motorists who were passing through Marske Road honked their horn as a sign of gratitude for Welford.

Welford said, “I’ve been caught there in the past and just thought I would try and annoy them a little bit.

He continued, “When I saw the van I just thought to myself I had a spare a few hours and nothing better to do, so why not? People have been loving it—one person got in touch and said, ‘Not all heroes wear capes.’”

Cleveland Police was obviously not amused. Welford said that the police approached him hours later to warn him that if he ever did that again, he could get arrested for harassment. The police, however, didn’t tell him to stop while he was just standing there.

Welford, who’s from Burley Close, Skelton, said, “At one point, an unmarked police car came past with two officers inside. But they just looked at me and kept driving. There was at least one officer but he just ignored me.”

He continued, “The police came around later and I was told I was lucky as I could have been done for harassment. But everyone else was beeping their horns and seemed to support me.”

Welford said, “They are there a lot, as drivers go down a bank and obviously pick up speed. When I first passed my test five years ago, I got a ticket there soon after but personally I don’t think it is an area of concern.”

He continued, “There was a school there years ago, but that was knocked down so I don’t think there is a real need for them to be there, which made it more satisfying.”

Harry Simpson, police inspector, said, “It is an unpleasant sight to come across the severed limbs of victims and then take on the task of informing families of these victims that their loved one is in a serious condition in hospital – or even worse.”

Simpson continued, “Those who do not agree with speed enforcement will no doubt speed themselves.”

Marske Road was a common site for dangerous crash, with 227 people caught speeding through that road for the last two years.