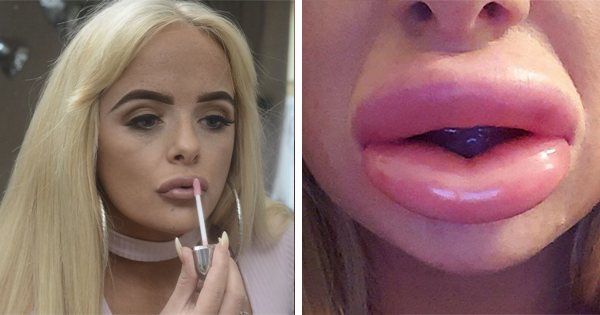 After Getting Cheap Lip Fillers, Her Lips Look Like Sausages Hanging Off Her Face.

Leona Omalley has developed a great passion for getting her lips filled to look plumper and perkier. On her fifth visit though, she decided to find a cheaper alternative and have a woman do it in her own home. The results are horrifying.

24-year-old Leona Omalley has had her lips filled four times before. Each time, she went to visit a clinic that specialized in the procedure, and the results were just as the specialists promised they would be. Her lips looked fuller and she was satisfied.

Before getting her fifth procedure done, however, Omalley was allured by one woman’s “cheap deal” that she could perform at home, not in a clinic.

After seeing this ad, Omalley decided to look up some of the woman’s previous customers. “I’d seen the adverts on Facebook,” Omalley said, “which all looked professional – she had a cheap deal on and I went with her because it was a week off Christmas and I just wanted them done.”

Omalley got in contact with the woman and had an appointment scheduled just nine days before Christmas; she wanted to have many chances to flaunt her new lips at holiday parties that season.

When Omalley got to the woman’s home, she was given a couple forms to sign. One warned her about potential lumps appearing in her lips in the first few weeks after the procedure, and that was it.

Almost immediately afterward, the woman slathered on numbing cream onto Omalley’s lips for two minutes, and then knelt down to proceed with the injections. “She…injected me from one angle on the left-hand side. She stabbed into my mouth all in one shot – it was over in two seconds – I’ve never experienced pain life it,” Omalley recalled.

“My mouth and lips were pumping out blood and I was panicking,” she said. “I was told ‘don’t worry it’s normal for it to do that’ and then she left.”

But as the hours passed, Omalley only continued to experience intense pain in her lips and she felt her lips and mouth begin to swell.

When Omalley finally had a chance to more closely inspect her face for herself, she was shocked speechless. “I looked like Pete Burns. It looked like there were two raw sausages tied together on my face. My mouth was stinging and it was really sore three hours later,” she described.

That was when Omalley finally decided to call for emergency services to take her to the hospital. She had gone into traumatic stress and needed attention, fast.

Omalley ended up staying at the hospital for almost six hours, sitting around as steroids were pumped into her body.

Although she was feeling better by the time she left the hospital, Omalley couldn’t bear the thought of having to show her face to her family when she left.

“I cried and couldn’t look in the mirror. …when I looked at myself and just thought ‘what have I done?’ I was heartbroken,” Omalley said.

When Omalley finally made her way home, her mother heaved and became ill upon seeing her daughter’s altered lips. Her father was upset as well, but her boyfriend was more worried about her. He’d always advised her against going through with the decision.

The worst part was Omalley’s shame in front of her children. Her five-year-old daughter was “traumatized” and Omalley didn’t want her two younger sons anywhere near her lips.

Now, ten days after Omalley was discharged from the hospital and sent home with prescription steroids to further reduce the unnatural swelling of her lips, she’s fearful of going under the needle again and has full intention to file a lawsuit against her unprofessional lip filler.

The beautician apparently practiced poor hygiene practices by not wearing gloves and carrying her needles around in a simple plastic bag, rather than a sterile case. She also used baby wipes, not antiseptic wipes, as she was supposed to.

“Cheap is not chic,” said one cosmetic doctor after hearing about Omalley’s plight. “You don’t search for fillers like you would a bargain in the sales.”

The beautician in question, however, is vehemently denying Omalley’s claims. “If I turned up with equipment in a carrier bag and didn’t have gloves on why would she let me anywhere near her with a needle?

“She also sat and read the consent, why would she sign a document if she had no idea what it was about? It’s absolute madness.”

There has been no update thus far on how the proceedings are going.