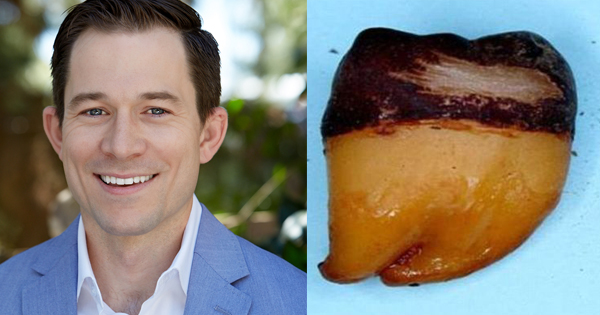 Dentist Conducts Experiment That Shows Soda Turning Teeth Black—And It's Not Even The Worst Drink Yet.

A dentist from San Diego shows what happens to the teeth when submerged in highly acidic drinks--even when they're not really sugary. Read on for more details!

A dentist from San Diego decided to end all of the arguments and debates regarding the corrosion of teeth due to soda drinking. With the help of his wisdom teeth and a few cans of soda, Dr. Tom Bierman went on the mission to find out the truth.

After two weeks of submersion, Dr. Bierman discovered that the tooth in regular soda turned black. The tooth in diet soda was not as black but still stained, and the tooth in the water remained the same.

The one that really took Dr. Bierman by surprise was what came out of the tooth in the energy drink. Bits of enamel was coming off of the tooth even though the drink was specifically sugar-free.

Even though Dr. Bierman managed to lessen the hate towards soda, it was still pretty scary either way.

Dr. Bierman said, “The rust color seems to be where the tooth was more yellow to begin with. And then there are those alarming lumps of enamel that have come off the tooth.”

He continued, “The enamel on this tooth was crumbling away. It had been a lot more destructive to the enamel than the cola tooth.

“Even more concerning is that this was the sugar-free version of the energy drink; it’s very potent stuff.”

Dr. Bierman grew up in Iowa and attended and graduated from the University of Iowa College of Dentistry. After he completed his degree, Dr. Bierman relocated to Washington, D.C. and worked with the largest dental group practice in that area.

The opportunity exposed Dr. Bierman to the many phases and practices of dentistry. He took every opportunity, whether it was big or small, to learn and hone his practice.

Dr. Bierman was also involved in dental mission trips in Central America and to the Caribbean to administer dental care for those who can’t or didn’t have any means for access.

His scientific experiment should warn everybody that sticking to water as the beverage of choice is fine and nothing to be ashamed for. As long as you have access to clean and potable water, cherish it. Don’t take it for granted. For others can’t drink clean water even though they’re living in one of the most wealthiest countries in the world.