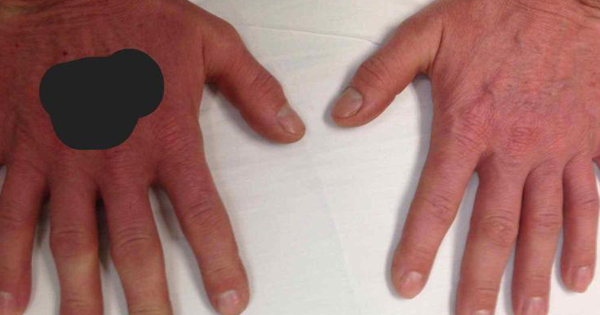 A Doctor Posts This Photo To See If People Can Spot A Very Rare Condition Of This Person.

A person born with fingers more than the average person had made rounds online via a photo posted by a doctor. Read on for more details!

A doctor posted a photo of a person’s pair of seemingly suspicious hands and fingers. According to The Sun, the photo was posted on an app and website called Figure 1, which serves as a space for people who work for healthcare to discuss and share stories from around the world.

A genetics doctor told The Sun that the rare condition, which is called polydactyly, only occurs in one in 500 people with increasing possibility in African countries. It’s a genetic condition and the extra finger has its own bones and nerves, which means that it isn’t just an extra that can be pulled out casually. An operation needs to be involved.

One of the most common ways an extra finger can be removed is by tying a ligature around its base as early as one can until it finally falls off the hand. However, Dr. Anand Saggar, a senior genetic consultant at St. George’s Hospital in London informed that that method isn’t always recommended to people with polydactyly.

According to Dr. Saggar, the person in the featured photo has bilateral postaxial polydactyly, which means that he has extra fingers on both hands. He said, “It just means extra digits and it can be bilateral [on both sides of hands or feet] or unilateral [on one side].

“When it is unilateral it is usually a sporadic occurrence and may not be genetic. But when it affects both hands, or especially if it affects the hands and the feet, then it is without doubt genetic.”

Although it doesn’t really cause any major health problem, Dr. Saggar still suggests that people with the condition could get a genetic test.

Dr. Saggar said, “If you [a doctor] see someone that has an extra digit you always have to ask, ‘Is it part of something bigger like a genetic condition or syndrome?’ But it can be normal in the sense that you’ve just got an extra digit and it won’t cause you any problems.

“It is quite common in Africa, specifically West Africa, there is definitely a gene that goes around that causes an extra finger to occur and that is all it does, it doesn’t cause any other problems. Although it is a flagging sign to ask yourself if you need to check if there is anything else associated with this.”

Actress Gemma Arterton confirmed that she was born with an extra finger but she had it tied so that it would fall off when she was very young. Despite getting it removed, Arterton defined it as “my little oddity that I am really proud of.”