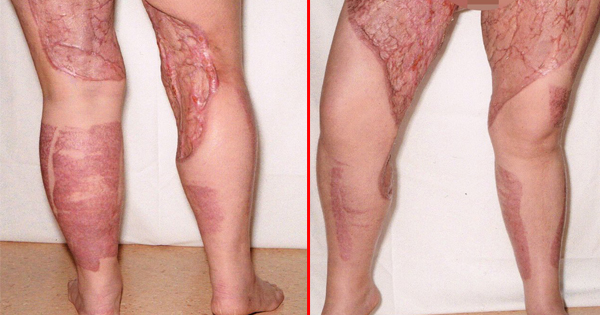 All She Wants Is To Shave Her Bikini Line. But, She Ends Up With A Flesh-Eating Bacteria.

A woman became a victim of a flesh-eating bacteria after she decided to shave her pubic hair with a razor. Read on for more details!

Dana Sedgewick, 44 years old, decided to shave her bikini line with a new razor. After using it, she spotted small pimple appearing. Then, it kept on bleeding. Dana said, “I didn’t think anything of it as I often got a rash from shaving.” She had to be taken to the hospital after she developed necrotizing fasciitis, the Metro reports.

Dana, a mom of three children, had to endure 21 surgeries just to repair the gruesome damage to her skin. Doctors had already told her that she would never be able to walk again.

Dana said, “Like a lot of women, I tried to keep a tidy bikini line. So, I had a quick trim with a new razor.”

The whole incident happened just two days after she shaved her bikini line in May 2012. She started to feel dizzy and nauseous. After she was taken to a doctor, her eldest daughter found her in bed with her legs all covered in blood and rash. She had to be taken back to the doctor immediately.

Dana said, “By the time I got to the hospital, my legs were covered in black, rotting flesh. It was touch-and-go as to whether I’d make it.”

While she was having the surgery, Dana went into septic shock, which lessened her chances of survival to just 30 percent. Her heart stopped beating four times and her kidneys even failed. Doctors had to put her into coma for nine days to preserve her chances of surviving.

Dana said, “When I woke up, my legs were covered in bandages and I had no idea what had happened. I thought I’d been in a car accident. But when the surgeon asked me if I remembered shaving, I suddenly recalled trimming my bikini line. He told me that the spot on my groin had become infected, and I’d been very lucky to survive.”

Dana had to undergo a special treatment so she was transferred to the burns unit of the hospital. She saw her legs for the first time since the incident.

Dana said, “It was horrific. All of my muscle had rotted away, and I had a crater of skin near my groin. I felt like I was going to throw up. But I knew that it could have been much, much worse. I could easily have lost my legs – or worse, died. It didn’t feel like my own body any more. But with Mat’s support, I grew to see the scars as a reminder of how brave I’d been, and how lucky I was to survive.”