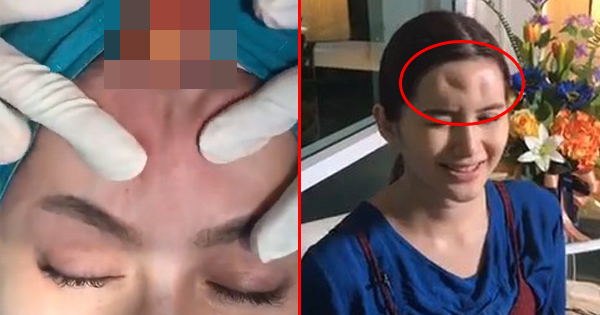 She Injects Filler Into Her Forehead To Remove Wrinkles. What She Gets Is A Big Painful Lump Instead.

A video shows the painful removal of the filler injected into the face of a woman who only wanted to look younger. Read on for the full story!

Nong Guang, 41 years old, underwent a cosmetic surgery two years ago when she had dermal filler injected into her forehead to smoothen her skin and remove her wrinkles. However, the filler failed to give her the firm forehead that she had wanted and now she could she the filler moving around in her face, The Sun reports.

Guang had said that the filler had made her forehead feel painful just a month ago and decided to have the filler removed.

The filler had turned into a soft, mushy substance that she could push around through her forehead. A video had caught the whole surgical procedure, which was done at Teeraporn Clinic in Bangkok, Thailand. The video showed a surgeon carefully squeezing out all of the infected filler and out through a small incision just above her forehead.

After ten grueling minutes of meticulously removing the gruesome infected yellowish filler by squeezing her forehead, Guang felt more comfortable with her face. After the filler, which was used to smoothen the skin from wrinkles, her forehead was stitched up and the doctors applied antiseptic to the area.

A spokesperson for the clinic denied that the first filler surgery was performed by their own doctors and were just relieved that the problem was fixed and happy to be of service.

The spokesperson said, “The patient came to us after having the filler injection surgery in her forehead. This had become infected and her forehead was very soft and left marks when it was touched. We removed it and made her forehead look beautiful again.”

The video, although may be considered as grotesque and a little cringy, has nothing against the videos taken by Dr. Sandra Lee, also known as Dr. Pimple Popper. However, Guang’s case and the video to prove should be enough to caution people who are considering cosmetic surgeries to known and validate credentials first before signing up for a procedure.