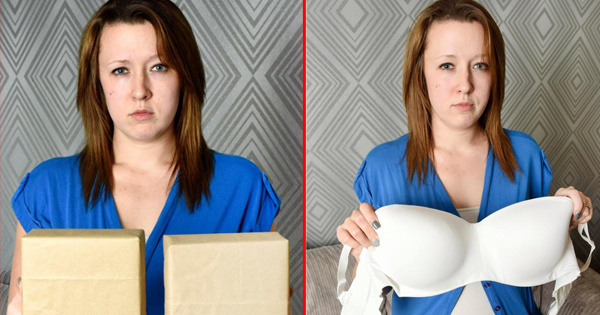 Because Of A Failed Boob Job, She Fears That Her 'Square Breasts' May End Her Marriage.

A 25-year old mother of two children was left with 'square boobs' after a botched surgery turned her into something her husband may not even desire anymore. Read on for the full story!

Katy Jones, 25 years old, went to the Harley Medical Group to improve her knockers from cup B to cup D for almost $6,500 seven years ago in March. Three months later, Katy woke up to discover that the implants had lost stability and became dislocated inside her chest.

Then, three more years had passed, the clinic offered Katy a corrective operation for free but she would have to increase her breast size from a cup D to a cup F. After the surgery, it didn’t solve the problem. Rather, it made matters worse for the implants had “flipped over in her chest,” according to The Sun.

Katy, who's married and has two kids, was so disgusted by her own body that she wouldn’t even let her husband caress her anymore. Katy, who’s from Nottingham said, “Getting the surgery is the worst decision I’ve ever made. It changed my life. I’m left with less confidence then before I even had implants.

“When I first had the operation, I felt amazing. I’d go out wearing low-cut tops and feeling great about it. I’ve been left with sagging boobs that have gone rippled, which isn’t meant to happen until ten years in. It’s only been three and a half years. And when I’m running around after the kids, it’s uncomfortable to bend down.

“I work behind a kiosk in a shop now and when I have to bend down to pick things up, I have to hold my chest to stop the implants flipping over. When they flip, I get a sharp shooting pain in my chest and I have to try and turn them over myself.”

The situation had taken a new level of bad as Katy felt that the implants were getting smaller, which meant that it had begun to leak inside her chest.

Katy said, “Since the corrective surgery, when I went up to an F-cup, they have sagged and I’d say that now they’re about a DD. They’re definitely getting smaller and I have to keep getting measured because they’ve changed. That’s worried me as well because I’m scared they’re leaking or that they’ll rupture.”

When Katy contacted Harley Medical Group, they said that nothing could be done to relieve her from her situation. The group was in the middle of a scandal in 2012 when around 1,700 women claimed that they were victims of botched implants.

Katy said, “I spoke to a man from Harley Medical Group and they sent me a letter in the post saying that they have changed to a limited company so they cannot help anymore. I’ve even spoken to the NHS about removing them but they said if they take them out, my chest would be left looking like a 70-year-old’s.

“I can’t afford to pay £5,500 to have another operation – especially if there’s a risk the same thing could happen for a third time. I have a mortgage to pay.”

A spokesperson for Harley Medical Group said, “The Harley Medical Group is committed to providing the best possible levels of care and service to our clients. We are unable to comment on individual cases. However, we are in touch Mrs. Jones and are in the process of reviewing her case.”