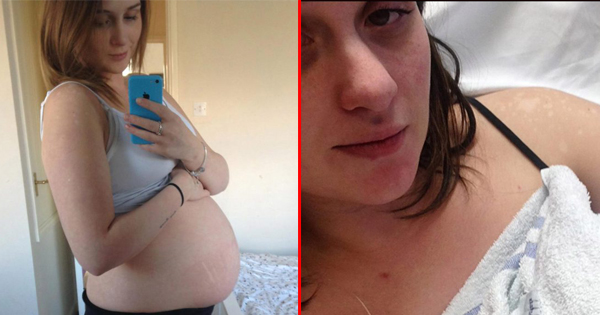 She Suffers From A Stroke While Giving Birth To Her Kid. When Doctors Find Out What's Happened, It's Too Late.

A mom wasn't completely shocked when she lost all of her control of her body while she was giving birth. Read on for more details!

Jenny Symon, 26 years old, was in the middle of delivering her baby when all of a sudden, she felt her legs go numb and she became paralyzed. However, after her previous experience with giving birth to her son, James, Jenny had an idea on what could possibly happen. Jenny suffered from a potentially fatal blood clot on the brain, The Sun reports.

While Jenny was giving all that she can to deliver her new baby, Emily, Jenny suddenly became paralyzed because of a blood clot on her brain. Doctors only noticed that she couldn’t move her baby right after the birth. She was immediately taken to the stroke ward.

Jenny said, “It was all very frightening and confusing. I didn’t know what was happening to me. I hadn’t been worried about the labor at all. I knew that it was going to be a long and painful process, but I hadn’t imagined that I would suffer a stroke through it.”

Jenny had to give birth three weeks before the actual due date after the latest scans shows that the baby wasn’t growing and developing accordingly.

Jenny said, “They didn’t know why she wasn’t growing properly, but they decided that she was better to be outside than in. So, I went into the hospital to be induced. No-one realized that anything was wrong at that point, everyone was concentrating on me pushing the baby out.

“I delivered Emily and I still couldn’t feel my leg at all. Emily was rushed away as she had been born with the umbilical cord around her so they were checking she was ok. Twenty-five minutes later my arm went dead too, and the side of my face had dropped, and I couldn’t make sense of what I was speaking about then.”

After a few weeks in the hospital, Jenny was finally released and went home to her partner, Olly, who’s 25 years old.

Jenny said, “My memory has been affected too from it all. I do forget things easily and I have to write everything down. When it first happened, I couldn’t even remember how to count. And a few months afterwards, I was standing in the kitchen at home, and I suddenly couldn’t remember how to make a sandwich.

“It did come back to me, but I do forget things like that all of a sudden. I can’t believe I suffered a stroke at such a young age. I had no idea that it can happen to young women like me. It was such a frightening experience, and to happen whilst I was giving birth was really traumatic. Luckily I have made a pretty good recovery and I can concentrate on being a mum now.”