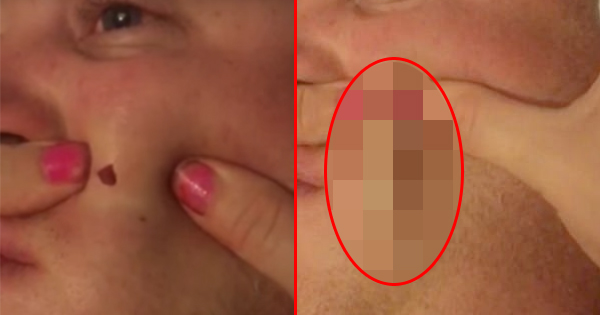 Wife Pops Husband’s Pimple That Has Been Growing For Four Years. She's Not Ready For What's About To Come Out.

A video of a woman squeezing her husband's pimple had been going viral due to the extraordinary eruption of the pus. Read on and watch the video!

Before squeezing a red pimple on her husband’s face, a woman named Khristina Powell decided to record the whole ordeal and post it on a social media platform. The short video clip shows Khristina’s two painted thumbs squeezing the seemingly huge pimple with much gusto.

According to Daily Mail, Wade, Khristina’s wife, 28 years old, had the pimple growing on his face for about four years. When she squeezed it, a yellow stream of pus erupted from the core followed by even more yellow pus. Wade had to wince from the pain. The video lasted for three minutes.

As soon as the pus flew out of the pimple, Wade had to close his eyes, probably to suppress the pain and not intentionally smell it. Khristina continued to press the pimple as more and more pus came out of it until it appeared to had been completely drained.

By the end of the ordeal, Wade said, “It was an instant relief when it was over.”

Lisa Bickerstaff, spokesperson for the British Skin Foundation, said, “It's always worth seeking help from a doctor or dermatologist when dealing with spots like this to avoid scarring and possible infection.”

Michelle Rodrigues of The Conversation said, “A pimple is like a little bag under the skin that contains oil, bacteria and inflammation. Squeezing it can result in these contents being pushed into surrounding skin, making the problem worse. It can also lead to infection and temporary darkening of the skin in that area.

“On top of this, the inflammation can become so bad that scarring is left behind when the pimple finally settles down. And scarring (unlike the pimple) can be permanent. If you resist the urge to squeeze, pimples will usually resolve over a week or so without scarring. The 'white' contents will also settle down or spontaneously pop when ready.”

Last week, a woman named Nong Guang, 41 years old, had to squeeze out the dermal filler out of her face after it got infected and failed to stabilize inside her skin. The filler was supposed to reduce her wrinkles. Instead, it made her face even more botched.