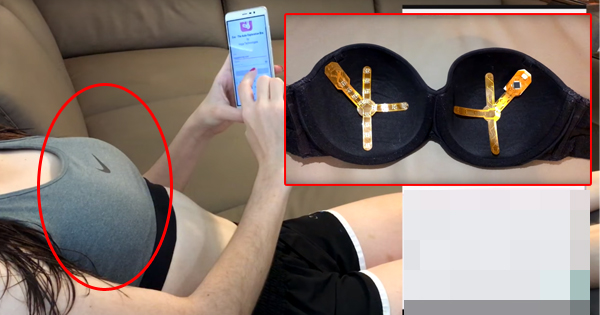 A Teen Invents A Device That Women Can Put Inside Their Bra. Here's What It Does.

A teen invented a breast cancer detection bra after he lost his mother to the disease. Read on for more details!

A teen from Mexico came up with an invention that would help women detect if they have breast cancer during the early stages after he almost lost his mother to the fatal disease.

In an introduction video for his company and his new invention, Julián Ríos Cantú said, “When I was 14 years old, my mother was diagnosed for the second time with breast cancer.

“The tumor went from having the dimensions of a grain of rice to that of a golf ball in less than six months. The diagnosis came too late and my mother lost both of her breasts and, almost, her life.”

Ríos Cantú, who’s now 18 years old, was motivated by the traumatic experience and pursued to be the next Elon Musk but for the betterment of women’s health. He designed Eva, an auto-exploration bra that aids women in detecting signs of breast cancer before it reaches beyond the early stages.

Ríos Cantú founded the company called Higia Technologies with three of his closest friends when he was only 17 years old. He currents serves as the CEO of the company.

According to Huffington Post, Eva uses “tactile sensors to map the surface of the breast and monitor texture, color and temperature.” Women who are more likely to get breast cancer due to genetic make-up are the basis for the effectiveness and design of the bra. Users can download an app on their phone or desktop to monitor or review the results.

Ríos Cantú said in an interview with El Universal, “What happens is we take all that data and store it. When there is a tumor in the breast there is more blood, more heat, so there are changes in temperature and in texture.

“We will tell you, ‘in this quadrant there are drastic changes in temperature’ and our software specializes in caring for that area. If we see a persistent change, we will recommend that you go to the doctor.”

Then, the teenager continued, “Why a bra? Because it allows us to keep the breasts in the same position and it doesn’t have to be used more than one hour every week.”

Although the teen’s invention is only a prototype, he predicts that it would take at least two years before it gets certified for public use, according to the Mexican newspaper.