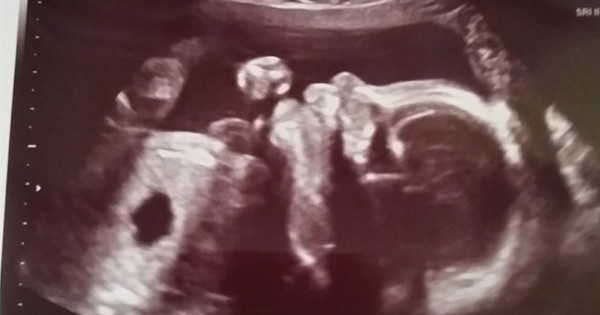 Doctors Spot A Frightening Black Hole On The Ultrasound, Then They Tell The Parents To 'Let This One Go'

Read on to find out what these parents did after a doctor told them to let their baby go.

Even with modern medicine and the best doctors money can buy, pregnancy has its risks. There are never any guarantees that a baby will be born perfectly healthy, and there are unfortunately a myriad of things that can go wrong in the womb. Sometimes, when a condition that can spotted in utero is so severe, doctors will suggest that the parents terminate the pregnancy. Knowing that the child either won’t live very long out of the womb, or that their lives will be extremely challenging with the conditions they may face, they offer this option to the parents as a course of action.

This is exactly what happened to a couple that was pregnant with their second child. At just 20 weeks, doctors spotted a “black hole” on the ultrasound, which reveals a congenital diaphragmatic hernia. The condition is a frightening one, with the odds of survival around 50%, and if left untreated, can dangerously affect the abdominal organs and lungs.

The father, who remained unnamed, shared his story on Imgur, writing: “At 20 weeks our baby was diagnosed with a congenital diaphragmatic hernia (the black hole on the left is her stomach ... in her chest). My wife and I are both medically literate and what we found through research supported what we were told: survivability could be less than 50% depending on several factors. One of our perinatologists​ told us it's better to just let this one go.”

This blunt news from the doctor shattered the couple’s hearts, but they couldn’t just give up. Not wanting to let their baby go, they decided to seek out other specialists. While they discovered that their case wasn’t advanced enough for in utero surgery, they were accepted into a clinical trial for less severe cases with postnatal surgery.

“We didn't want to let her go so they referred us to Texas for a consult regarding an in utero surgery option. We weren't a severe enough case to qualify for the surgery (oddly good news considering that it came with an upgraded 80-85% survival rate without surgery).” The father wrote.

At 39 weeks pregnant, their baby was born. She was rushed to be intubated, and moved to critical care just moments after she arrived.

“It followed at 39 weeks that our second child was born, immediately intubated and moved to critical care. She was intubated, sedated, on dopamine for blood pressure support, had multiple peripheral and central lines, and was on parenteral nutrition. I've never felt more torn than during the first few minutes after delivery. In one side of the OR my daughter was being intubated and was barely clinging to life ... on the other side my wife was recovering from having just given birth. I parked where I could see both and let Mom know her baby was being taken care of.”

As soon as their daughter was 4 days old, she received surgery to repair her diaphragm. The couple met other parents with stories similar to theirs- parents who had also been told to let their child go. At 29 days old, their baby girl was able to come home, and her father says he “never intends on letting her go”.

“I'm​ not mad that we were told to let her go. It made me realize that there are diseases and conditions that genuinely need awareness in a world that is saturated with awareness campaigns for well known problems.” he says.

After a bleak diagnosis from doctors and a terrifying delivery, it is amazing to see the photos of this baby girl smiling. This story just shows how important it is to trust your gut instincts, and to never give up on your child.

You can see more photos and read about this family's story in it's entirety here.