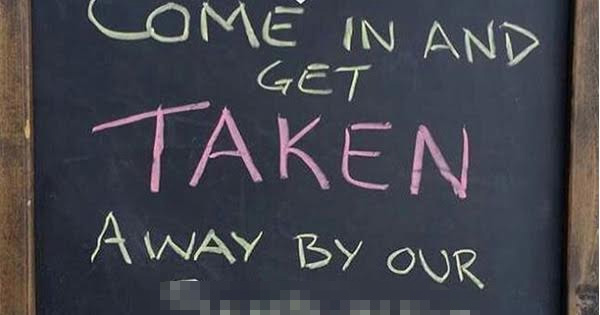 Sandwich Shop Posts A Joke On Their Sign. Hours Later, They're Thrown For The Biggest Loop.

When you’re out looking for a place to eat, what is it that will catch your attention and hopefully get you inside the door of a restaurant? Is it the delicious smell wafting from the windows? Perhaps it’s the cute decor or a comfortable looking patio? Maybe you’re someone who is easily swayed by positive Yelp reviews. For some of us, a witty sign will do the trick! Lots of bars, cafes, or smaller shops will put out signs either advertising their specials or sharing some witty phrase that either makes you roll your eyes or chuckle a bit. As anyone ever seen the: “Daily special: buy 2 beers and pay for both of them!” sign?

When a sandwich shop in New Westminster, Vancouver, Canada heard that popular actor Liam Neeson would be in town filming a movie,they thought they’d come up with a clever way to include the star in their slogan for the day. Big Star Sandwich shop got out their chalk and wrote: “Liam Neeson Eats Here For Free” on their outdoor sign.

Liam Neeson, alongside stars like Emmy Rossum and Tom Jackson are working on a film entitled “Hard Power”, which is a remake of a Norwegian film called “In Order of Disappearance” about a snowplow driver who seeks revenge on a group of drug dealers who killed his son.

Since they knew the actor was filming in the area, they thought it would be a funny joke to offer him free sandwiches. Obviously none of the staff ever thought that the actor would ever see the sign, let alone come in for a free bite!

Turns out, they couldn’t have been more wrong. The actor totally passed by the sign and decided to come in to redeem his offer. Can you imagine the look on everyone’s face when Liam Neeson strolled through the door of the sandwich shop? He even brought some along some of the film crew to join him.

Despite his film sounding like a pretty serious one, the actor obviously has a great sense of humor, and a fun personality. He posed with some of the Big Star Sandwich staff right behind their funny sign. We wonder if the shop has gained some popularity since the star sighting, or if the actor has been back for more free sandwiches?

It’s nice to see celebrities not only showing support for local business, but sharing their light hearted, human side too. After all, who doesn’t want a free sandwich?

The sandwich shop shared the picture of the star with the team, and the photo’s caption really says it all: “Holy f**k, it worked!”.

What turned out as a silly joke ended up being an unforgettable day for this Canadian sandwich shop. We guess it never hurts to offer free sandwiches to celebrities who are filming in the area!