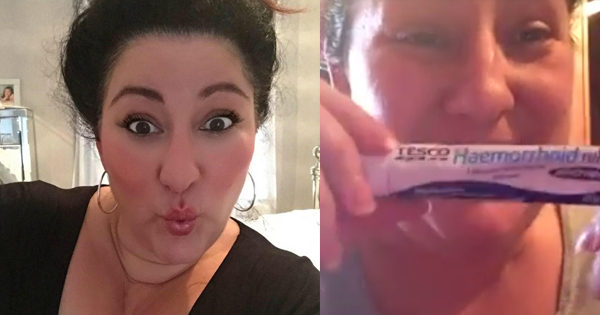 She Follows Really Old Beauty Advice Regarding A Hemorrhoid Cream. Her Reaction Is Hilarious.

Antonella, a beauty vlogger, posted a video of her trying out hemorrhoid cream to improve her skin. Read on for more details!

A beauty video blogger named Antonella the Uncensored Reviewer posted a new content on Facebook in which she discussed the archaic use of hemorrhoid cream in treating the appearance of eye bags. Needless to say, it was fantastic and hilarious.

In the video, Antonella covered the area under her eyes with the hemorrhoid cream after she read about the old beauty advice. She’s doing it to see if it would actually work and so that her followers would be able to see and check it out before trying it on themselves.

Antonella said, “Apparently in the olden days they used to do this for the bags under their eyes and you know me, I will try my best to find something for bags and dark circles. I've done it this evening because my bags are quite bad so let's put it on. I don't think I'm going to go too close to my eye area. It doesn't feel like anything or smell like anything, just a bit like Vaseline.”

After she had applied the hemorrhoid cream, she inquired her viewers if they could see any difference that had happened in her eyes. She then proceeded to conclude that the beauty advice was probably not even true of bore little to no evidence of making improvement.

Antonella said, “Can you see a difference? Let's have a look. My skin doesn't feel tight or anything - it's not made a f*****g difference. Instant results with pile cream - well they are talking out of their a**e as that has made me look I've just wiped Vaseline under my eyes. So, the mission goes on."

Antonella’s video now has more than two hundred thousand views. Viewers were confident to share some of their experiences in their attempt to clear or treat eye bags and dark circles.

Tracy Tanner commented: “I convinced my ex to try pile cream for the bags under his eyes, not realizing the product also had an anesthetic in it. I have never laughed so much, watching him squirming and having a meltdown, when his face went numb."

Leah Devaney commented: “Coconut oil for dark circles under your eyes. Cheap as chips and works a treat, if you rub a tiny amount on your eye lashes and eye brows it helps those grow too.”

Maybe the difference wouldn’t actually happen in just a few minutes. It might take a few more applications and days for it to make a more comprehensive judgment. Anyway, by the end of the video, Antonella showed a tea cup after claiming the her job was turning her into a drunk.