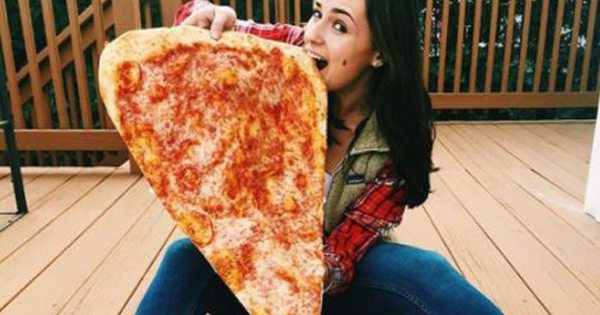 Do Americans Really Have The Biggest Portion Sizes In The World? This Pizza Place Is Testing The Limit With Their Massive Slices!

A restaurant in New York is really pushing boundaries by serving its customers absolutely massive slices of pizza. Keep reading for the full story!

Have we gone too far with super-sized food? A restaurant in New York is officially pushing huge portions (and our waistlines) to the limit with their massive slices of cheesy pizza.

Ever since Pizza Barn opened in Yonkers in 1975, foodies have flocked to the famous restaurant for its delicious pizza.

But after an appearance on the travel show Food Paradise, the local favorite has made a name for itself all over the world.

So, what sets Pizza Barn slices apart from its competitors? Well, for starters, each slice is 24 inches long—the size of a large pie!

People are so excited about these giant slices that they’ve been making their way over to the restaurant just to snap some Instagram-worthy shots.

Because the unbelievable slices are so big, they must be stored in custom-made boxes for the restaurant’s customers.

While a basic cheese slice is only about $12, diners can end up spending as much as $32 on a single slice with tax and extra toppings.

DeLuca and his team have gotten so creative with the pizzas that they’ve even created specialty slices like mac ‘n cheese and cheeseburger with fries.

Of course, unless their customers are really trying to test their limits, most diners order one slice for multiple people.

Others, however, will buy a whole slice just for themselves so they can score a great photo.

“I had a few customers try [eating it alone] and they almost finished it but I had to put [the leftovers] in a bag,” DeLuca said.

According to The Daily Mail, servers at Pizza Barn also make sure to wear special T-shirts to advertise the slices, which read “Size does matter” across the back.

While Pizza Barn claims to make the biggest slice of pizza in the world on a regular basis, the largest slice ever was made in Naples, Italy, back in May.

Although people all over the country have made Pizza Barn a major tourist attraction in Yonkers, it remains unclear if anybody has ever actually finished one of the Super Slices on their own.

The Daily Mail shared this unbelievable story online, where people from all over the world left comments about the insanely large slices of pizza.

Although many commenters thought Pizza Barn was on to a great idea, others insisted on criticizing Americans for being unhealthy with their portion sizes, which have gotten out of hand over the years, according to many health experts.