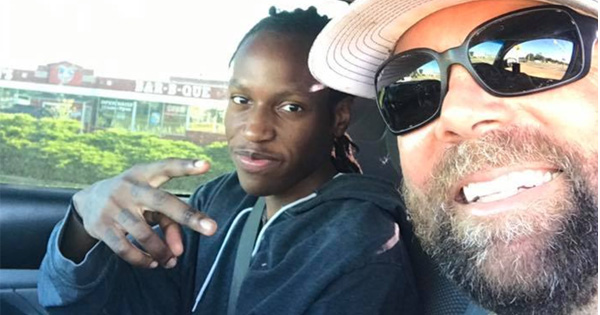 He Sees A Man Walking To Work In 90 Degree Heat. After Picking Him Up, He Knows That Fate Brought Them Together

Read on to find out what happened after this complete stranger offered a man a ride to work.

One thing that many of us dislike about our jobs is the daily commute. No matter how far you live from your place of employment, getting in the car and sitting in traffic day in and day out really takes its toll. However, we don’t realize how lucky we are in these situations until we see someone like Justin Korva.

Justin is 20 years old and works at Taco Casa in Rockwall, Texas. Even with temperatures getting up to the high 90s in Texas, Justin still walks 3 miles to his job every day, and then walks home when he’s done, since he doesn’t have a car.

Recently, a complete stranger saw Justin walking his usual route to work, and offered to give the young man a ride. The kindhearted stranger’s name is Andy Mitchell, and once he heard Justin’s story, he was blown away.

“Meet my friend justin! I picked this boy up this am and gave him a ride to work at taco casa.” Andy wrote on Facebook. “He told me he walks 3 miles to work and home everyday. To all the people that say they want to work but can't find a job or don't have a vehicle all I can say is you don't want it bad enough! As Wade Anders would say leave it better than you found it!”

But that wasn’t all Andy did. After meeting Justin and learning more about him, Andy wanted to buy him a bike to help him with his commute. However, as soon as more and more people in the community saw Andy’s Facebook post, they came up with a better plan.

Within 30 hours of Andy sharing his post about Justin on Facebook, strangers had raised $5,5000 to get Justin a new car! After Samee Dowlatshahi, a restaurant owner in the area heard about Justin’s story, he set up a donation box outside. People were beyond eager to help Justin out.

Just two days later, Andy met up with Justin and presented him with a 2004 Toyota Camry, which was offered at a discounted price from Toyota of Rockwall after they heard Justin’s story as well.

"Justin, you can't imagine all the people who wanted to help you. So, instead of walking to work, buddy, you're driving this car from now on."

Needless to say, Justin was shocked. With all the money raised, Justin not only got a car, but a year’s worth of insurance and oil changes for a year!

"We just want you to know, seriously, this community, nothing we love better than to have someone who works hard. We take a lot of pride in that. It's so hot out here, I can't believe you walk even one mile in this heat." said Samee Dowlatshahi.

This story is a true example of the power of kindness and paying it forward! What do you think of Justin’s story and what Andy and his community did for him?