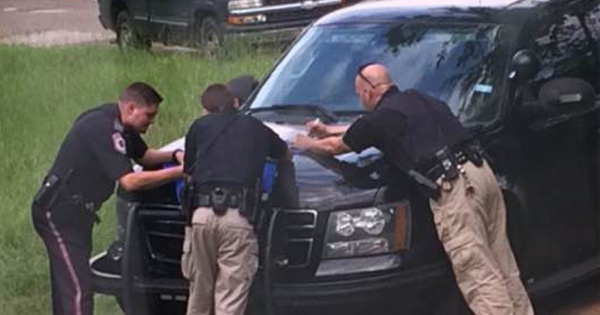 Read on to find out how these cops responded to an autistic child's fit of rage after a meltdown.

These days, it’s more of a rare occurrence to come across a positive story about law enforcement. Thankfully, this story about a boy with autism and the police who came to help him is a story with a very happy ending.

Sherry Lynn Hillard’s son has autism, and he was having a rough day. In a post on Facebook, Sherry explained that her son wanted to dress like the character Joe from Blue’s Clues, but was unable to find the perfect shirt. He became upset, and according to Sherry, his “meltdowns turned to rage”.

“The meltdown today was because John wants to dress like Joe on Blue's Clues but I can't find that same shirt anywhere.” she explained.

Because of Sherry’s son’s “rage”, 6 officers had to come to the house. Though this could have been a very stressful and scary situation, Sherry found it to be quite the opposite, and was thoroughly impressed with the patience and kindness the officers showed her son.

Dealing with autism can be very challenging, especially for those who aren’t familiar with the condition. While some people with autism become very reserved and quiet, others can lash out in aggressive and violent ways. Thankfully, the officers who came to help Sherry and her son took the time to find out how to deal with her son’s rage properly.

“They showed up not knowing much about autism but they listened and learned while they kept us all safe. They also asked ALOT of questions so they wouldn't do the wrong thing.” Sherry wrote.

Not only did the officers showcase patience and understanding, they went above and beyond to help Sherry’s son even more. After calming her son down and finding out why he was so upset, they took it upon themselves to help create the shirt that he wanted.

“After calming him down, the officers went and bought a blue shirt and with Jenn's fabric markers they attempted to create the shirt John wants.” Sherry recalled.

Though the shirt “didn’t work”, according to Sherry, she was blown away by their efforts. For a parent of a child with autism, it is extremely rewarding and heartwarming to see people attempting to understand and help, rather than operating out of fear or judgement.

Sherry posted a photo of the cops working on the DIY shirt for her son, where it was liked more than 399,000 times and shared over 129,000 times.

“That's what this pic is, 3 officers going above and beyond to help a severely autistic teenage boy! Sadly, it didn't work, but the fact that they were willing to do this for my son made them hero's in my eyes.” she wrote.