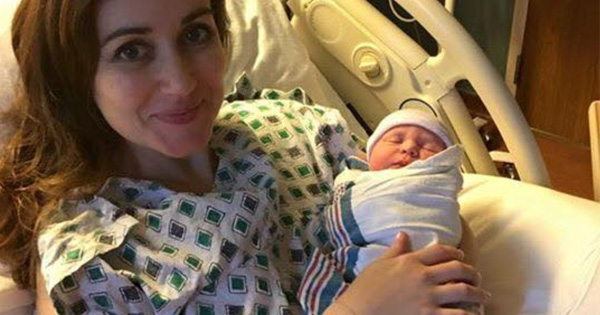 Doctor Is Getting Ready To Give Birth To Her Own Child, But Then She Hears Screams From Down The Hall

Read on to find out what this expectant mother did when she heard a woman screaming down the hall.

It can sometimes be easy to forget that doctors have their own lives outside of the hospital. Even if we happen to meet a doctor through a friend or coworker, our knee-jerk instinct is to ask them to take a look at something, and somehow confirm that we’re healthy. However, doctors are just like us- they get sick, have babies, and have to be a patient at a hospital every now and again too.

One woman named Amanda Hess is an obstetrician-gynecologist who was expecting the birth of her child any day now. She checked into Frankfort Regional Medical Center expecting to be a patient for the next few days, but ended up giving in to her doctor instincts as well.

As Dr. Hess was putting on her patient gown and prepping to give birth to her second child, she heard screams coming from down the hall. The cries were coming from Leah Halliday Johnson, a woman giving birth to her fourth child. Dr. Hess had actually examined Leah during her pregnancy, so she asked a nurse to check on the mother.

In a frightening turn of events, Leah’s fourth child was in trouble, as the umbilical cord was loosely wrapped around the baby’s neck. The on-call doctor was away from the hospital on a break, so the nurses were urging Leah not to push. However, the pain was becoming too severe for the mother. That’s when Dr. Hess decided to do what she did best: help a patient.

The extremely pregnant doctor threw another gown on to cover her backside, and ran into Leah’s hospital room.

“I had actually taken a call the day before, so I thought really that I was working up to the last minute. But this was literally ’til the last second.” she said. “I said you know, I’m not on call, I’m here in a gown, but I think we ought to have the baby."

Thankfully, Dr. Hess was able to get the baby out safely, and the on-call doctor returned to assist. Just a few hours later, Dr. Hess welcomed her own baby girl into the world.

Leah was blown away by Dr. Hess’ actions, and is grateful that she was there to help her and her child.

“She was definitely in doctor mode. My husband noticed something was going on because she had on a hospital gown, but I didn’t notice that because I was on the delivery table. I was in my own world there.” Leah said. “Pretty amazing what she did. I feel very lucky she was there and the type of person she is and step up to do what she did. We really appreciate her.”