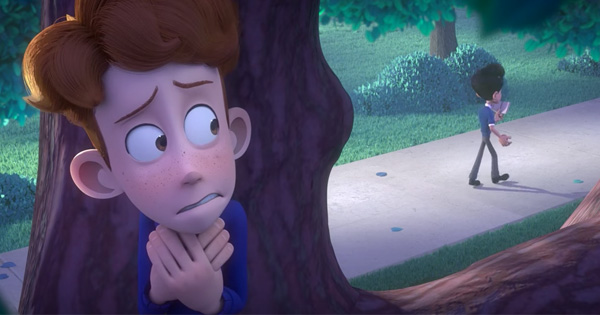 Read on to learn more about this now-viral animated film about a closeted boy who follows his heart.

Who can resist an adorable animated film? With Disney, Pixar, Dreamwork, and the like constantly cranking out silly and sweet films for our little ones (and adults, too!) to enjoy, it can be hard to pick a favorite.

Writers, directors, and animators alike are always looking for ways to not just be creative, but to speak to kids and adults in an honest, relatable way. The recent emergence of much more diverse, dimensional characters in animated film has only been welcomed with open arms, as children from all over the world feel like they can see themselves in each unique protagonist.

When Beth David and Esteban Bravo got into animation, their goal was to create something that they wish they could have seen when they were kids. While working on their college thesis, the two animation students at the Ringling School of Art and Design in Florida paired up to create a short animated film, the likes of which no one had ever seen before.

They created a simple, yet powerful story about something we’ve all experienced: a crush. But the difference is, in this 4 minute film, the affection is between two characters of the same gender.

“The original pitch was a story between a boy and a girl. But it wasn’t until we made it about a same-gender crush that the idea really started to take form and resonate with Esteban and I. We realized that we had something that could potentially be really special to us.” Beth told NBC News.

The film’s concept resonated with many people, and the duo was able to raise over $14,000 on Kickstarter to fund the production of the short film.

A trailer for the film, entitled "In a Heartbeat", was released in the spring, and it quickly went viral thanks to shares on various social media outlets. It didn’t take long for the film’s snippet to gain over a million views.

The completed film was recently shared on both Vimeo and YouTube, and the response has been unbelievable. In just one day, the film gained over 2.4 million views on YouTube.

Beth and Esteban could not be happier with the result of their hard work, and they hope that their contribution will help further more representation of the LGBTQ community, not just in media, but animation specifically.

“There have been a few nods to the LGBTQ community in recent children’s programming … but it’s very rare that an LGBTQ character is given the spotlight. Especially in a medium like animation that is predominantly geared towards children and family.” Esteban said.

“We wanted to challenge the preconceived notion that LGBTQ content is not appropriate or suitable for younger audiences. It’s an innocent and lighthearted story about a boy and his crush that we hope will resonate with younger people regardless of their background.” he continued.

Beth and Esteban admit that their has been a bit of negative backlash surrounding the film, but overall, the response has been exceedingly positive.

“The LGBTQ themes are of course front and center, but ultimately it’s a story about a crush. That’s something that almost everyone has experienced and can understand — which is kind of the point we were trying to make, that everyone, even gay kids, go through this.” Beth said.

You can watch the short film for yourself below!