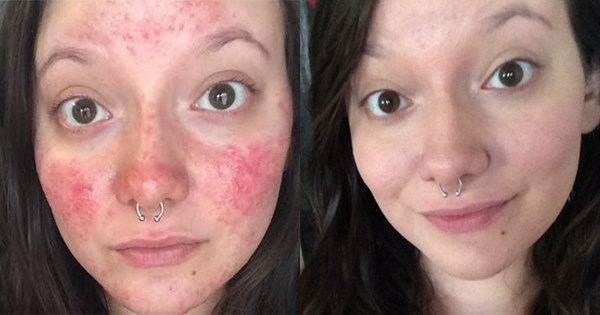 Nothing Helps Treat Her Bumpy Red Skin. Then She Tries One More Super Simple Treatment...

She tried everything, and nothing worked. But there was one last shot...

Though physical appearance definitely isn’t the most important part of one’s life, self-esteem is hugely important for health.

So when Imgur user psychedelephant woke up to this reflection staring back at her, her self-esteem plummeted.

She suffers from rosacea, and has been suffering for two years. While cases are not always this severe, her condition demonstrates all of the common symptoms of rosacea.

The condition generally occurs in adults over the age of 30, and it primarily affects the face.

There isn’t a known cause or cure for rosacea, although it affects 14 million Americans.

If you want to treat it, though, there are treatments for some symptoms of rosacea, including flushing, persistent redness, bumps and pimples, and visible blood vessels.

This woman represents a classic case of just trying different treatments until one works. Someone suggested that she try an over the counter healing ointment, called Aquaphor. It’s usually used for sensitive skin, and commonly to heal tattoos.

She applied the ointment to her rosacea-affected skin regularly for a week. The bumps on her skin went down, but the redness only got worse.

Determined to see if this would be the treatment that finally worked, she kept at it.

By weeks two and three, she saw the redness finally go down.

And after a month, it was gone for good.

While Aquaphor worked for her, this isn’t the only treatment out there.

Talk to a doctor if you have rosacea, because you can also get antibiotics to treat it. These can be anti-inflammatory and can help get rid of the redness. Acne medications may be helpful too.