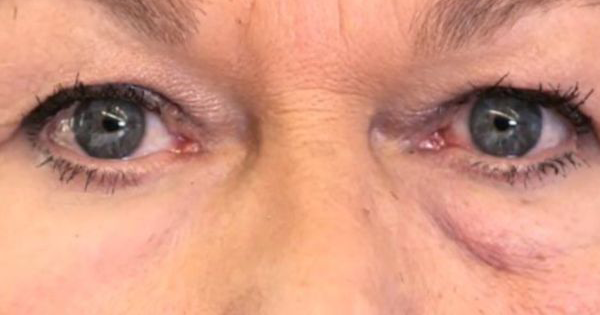 Scientists claim they have created a "second skin" that hides wrinkles and other skin imperfections without the risks associated with cosmetic surgery. Keep reading to learn more!

Scientists claim to have developed a “second skin” that actually hides the appearance of wrinkles and a slew of other skin problems.

According to a report by Nature Materials, a team of scientists from Harvard Medical School and the Massachusetts Institute of Technology have tested a revolutionary formula that "mimics the properties of youthful skin."

The formula, which was applied to a number of volunteers’ under-eye bags, forearms, and legs, forms a film once it dries to protect a person’s skin.

As BBC News reports, the polysiloxane polymer was made by using molecules of silicone and oxygen as the backbone to the product.

It’s important to note that while the cosmetic skin is in fact synthetic, it’s designed to be just as flexible and breathable as real skin.

The researchers who designed the film even insist that this so-called “second skin” actually boosts skin elasticity and locks in overall moisture.

Once the protective film was removed throughout the trials, the researchers found the skin to be more elastic, firmer, and less wrinkled than before.

The patented film, which is invisible, may soon be sold commercially once the polymer undergoes more testing and is approved by safety regulators.

After reviewing the film, Dr. Tamara Griffiths of the British Association of Dermatologists says this polymer formula may actually be a viable alternative to cosmetic surgery.

"The results [with the polymer film] appear to be comparable to surgery, without the associated risks. Further research is needed, but this is a novel and very promising approach to a common problem. I will follow its development with interest," Dr. Griffiths said.