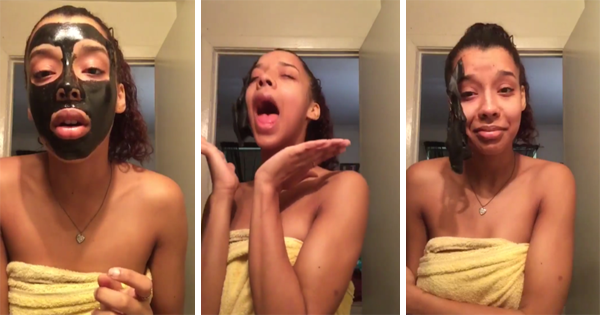 She Starts Shrieking When She Realizes Her Face Mask Is Stuck

When Cachet Raynor decided to try a popular blackhead-removing face mask for herself, she didn’t realize that it would cause her to become an Internet sensation.

It’s now more and more common for people to try beauty DIYs by themselves at home. Products like the PIL’ATEN Suction Black Mask promise to remove facial blemishes – in this particular case, blackheads – and leave the skin looking and feeling soft and clear.

This is what Cachet Raynor, a teenager from Glen Burnie, Maryland, decided to do for herself.

She ordered the PIL’ATEN Suction Black Mask online and eagerly followed the instructions to remove the blackheads from her face. Raynor carefully avoided her brows and lips, and left the mask on for the designated hour.

Raynor, however, didn’t realize how strong the “suction,” or how tight the face mask, would be.

By the end of the hour, the mask was almost impossible to remove because it was so tight and the removal was incredibly painful.

For some reason, Raynor decided to film the entire ordeal – profanity and shrieking included.

Raynor tweeted the video once she was finished. It has received 131k likes, as well as 82.5k retweets.

Other social media figures have also shared the video on their accounts, saying Raynor’s reaction had given them a good laugh.

One of these shares has been viewed 16 million times.

“I actually didn’t think the video would go viral,” Raynor admitted. “I was just being silly.”

Other people have filmed their own experiences using PIL’ATEN Suction Black Mask, but compared to these short videos, Raynor’s stands out. It’s easy to see why it gained so much attention so quickly.

Removing the face mask might have been incredibly painful for her, but for us on this side of the screen, it’s simply hilarious to watch.

I WILL NEVER DO THIS SHIT AGAIN pic.twitter.com/6hFIrFfGed