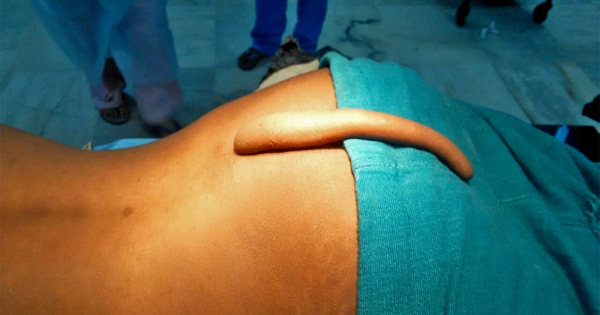 His Parents Told Him His Tail Was A Good Luck Charm. But After Keeping It A Secret For 18 Years, He Finally Went To The Hospital

This Indian boy concealed his tail for 18 years because his parents convinced him it was good luck. Now, he’s finally getting it removed and couldn’t be more relieved.

A boy (whose name hasn’t been released for privacy) in western India recently walked into Super Specialty Hospital in Nagpur, Maharashtra and told doctors that his tail was giving him incredible pain.

That was when doctors finally discovered that this 18-year-old boy had been born with a tail that had now grown to be seven inches in length.

For his entire life, the boy had sought to conceal it. His parents told him that his tail was a good luck charm, that he shouldn’t get it removed, and that he should hide it from others.

After 18 years of listening to his parents’ advice, the boy finally couldn’t take it any longer.

The tail was giving him “extreme pain in his lower back, problems while sleeping and sitting.” Dr. Pramod Giri, head of the neurosurgery department at Super Specialty Hospital, noted that “the boy was also suffering from an extreme psychological issue because the tail was growing so he had to always adjust the tail in his clothes when sitting.”

Thankfully, the surgery to remove the tail wasn’t complicated. Dr. Giri knew he had to proceed with caution, since the tail connected to the boy’s spinal cord, but because the tail didn’t otherwise contain any bone or muscle, it was an otherwise simple procedure.

Even just a few days after the successful operation, the boy is much happier and relieved to have the abnormal growth removed.

“He is very happy. He is now very comfortable while sleeping and sitting. He says he feels more confident about himself now,” Dr. Giri said.

You can watch a video of the boy with his tail here: