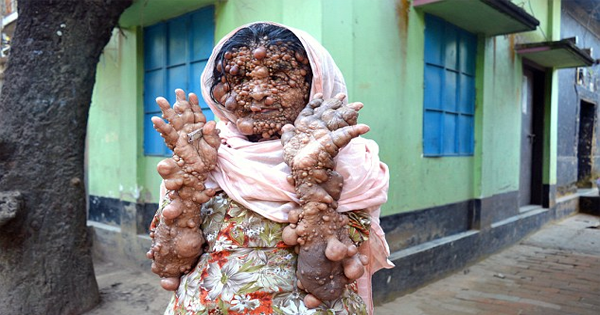 For 60 Years, She Can't Stop Tumors From Spreading All Over Her Skin. Now, She Wants Nothing More Than To Die.

For the past 60 years, ever since she began to develop unsightly, massive tumors across her bod, Hosinera Begum has suffered from the taunts and side-eye gazes of everyone in her small village in Bangladesh. This is her story.

When Hosinera Begum was born about 60 years ago, she was well-aware of the unusual pimple on her upper lip and the fact that similar, tiny bumps were present across her face and neck.

Although these growths bothered Begum, she was, by her own assessment, a happy girl. At 16, when the appearance of these bumps was still fairly innocuous, she’d actually fallen in love with a man who her father ultimately let her marry.

The two wed and had a son just a year later, during which Begum said “she was a decent-looking woman,” still.

About two years later, though, Begum’s condition began to deteriorate. Her tumors began to swell at an uncontrollable rate, and her husband struggled to make enough money to fund for her treatment.

Out of desperation, Begum sought help from a roadside doctor and asked them to at least cut off the worst of her growths. This only made the entire situation worse, as pimples grew back and started swelling to the size of tennis balls.

Begum’s husband soon fell into a depression as he was perpetually unable to fund for his wife’s proper treatment. It wasn’t long until he succumbed to the pressure and stress of his daily life and passed away.

Even after his death, Begum kept trying to find new doctors, who had proper medical licenses, to diagnose and treat her condition, but to little success.

Eventually, Begum had no choice but to return to her home village and live with her son and his family, every day enduring the taunts and jibes of others in the village.

They would call her “Potato Woman” and offer her no sympathy for her condition.

“The tumors hurt. These hurt badly,” Begum admitted. “I scratch all day and sometimes even blood comes out. I cannot take this pain anymore.

“No one talks to me or meets me. People even turn around if they see me from a distance. Children are sacred of me. Even my grandson who is only three sometimes cries when he sees me. I live like an outcast. I think the only way I can be freed from this pain is by death.”