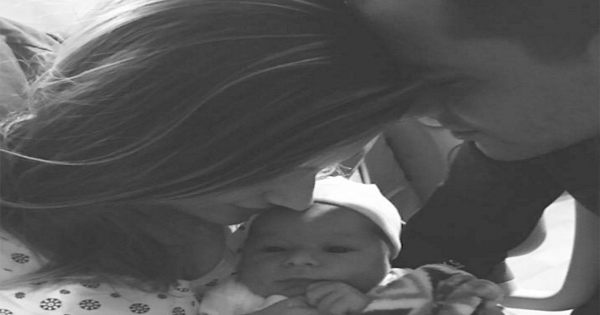 Moments After This Woman Gives Birth, She Forgets Everything That's Just Happened

Moments after mother Tisha Heffron gave birth to her second child, she completely forgot why she was in the hospital or what she was doing in the first place. Watch the hilarious moment.

Tisha and James Heffron live in San Diego, California, with their one son, Jackson. Just recently, the parents welcomed a second child – another son called Clay – into the world.

But just moments after Tisha gave birth to Clay, she suddenly had a severe memory lapse and had no idea where she was or what just happened. Everything in her memory is jumbled.

Because of all the painkillers the doctors administered her for her labor and delivery, the mother woke up woozy and confused. From her first waking moment, she has no idea what’s going on. Her first words to her husband are, “I’ve been sleeping all this time…”

From the video, it seems like it might be morning at the hospital, and later on, James confirms that Clay had been born around 11 o’clock p.m. last night.

In response, James tries to correct his wife, reminding her gently that she’d just given birth.

Tisha starts. “No, I gave birth to Jackson,” she corrects. At least she remembered that much.

James agrees readily, explaining that she’d also given birth to Clay at 11:18.

But even then, Tisha is extremely confused, seemingly unable to determine whether events happened at night or in the morning.

Later on, James explains to Tisha how people can close and open their eyes. While this concept might seem completely acceptable to any other person, Tisha is shocked. She can’t believe that closing her eyes can cause her to not see anything at all in that moment.

Immediately after her little epiphany, she changes tracks and asks, “Are you my mom?”

When James says no, her mother is in New York, Tisha continues by asking if he’s her brother instead.

To that, James explains – as patient as always – that “that’d be weird” since they’d just had their second child together.

Tisha accepts everything James says without second question, but gets distracted moments later by an itch on her face and arms. She claims they’re bugs, but stops short when she sees all the tubes connected to her left arm.

There’s a moment where she tries to tug these tubes out, but James gently stops her, telling her that there aren’t any bugs and that she shouldn’t tug at those.

This type of exchange continues for quite some time. Tisha gets distracted and asks any question that comes to mind – including where she pushed her baby out of her body.

The question prompts James to go into a slightly abbreviated conversation about his wife’s female parents and the fact that no, he doesn’t have the same parts.

James’ video gets cut short, but media representatives reached out to the new father to make sure that his wife is actually okay, her brain fully functioning and not actually addled by the apparently too-strong painkillers the doctors prescribed her.

James confirmed that when the painkillers wore off, “Straight away she remembered Clay and the whole birth process — that was a relief. Once Tisha had woken up from her drug-induced hibernation, she was fully cogent.”

You can watch the hilarious video here: