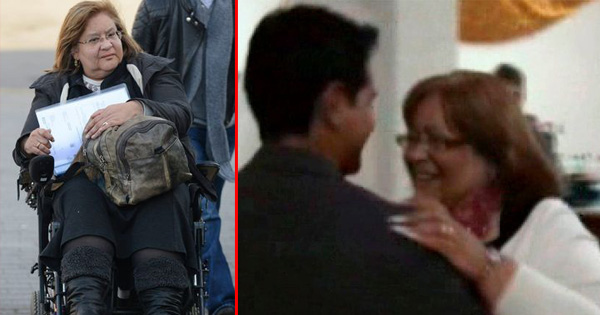 She Says Half Of Her Body Is Paralyzed. But Videos Of Her Dancing Prove Otherwise. Now, She’s In Jail.

Videos of a 53-year-old woman dancing to Michael Jackson's "Bad" surfaced after she falsely claimed that half of her body was paralyzed for 11 years and received disability benefits from the government. Read on for more details!

Maribel Milligan, 53 years old, was sentenced to three years in prison after she was caught claiming over 500,000 UK pounds from disability benefits over the course of 11 years, the Daily Mail reports.

Milligan, who’s from West Cornforth, County Durham, was caught on video flailing her arms and dancing to a Michael Jackson song. She claimed to the Department of Work and Pensions that the left-hand side of her body was paralyzed and immobile.

Milligan was claiming seven other benefits for the similar fraudulent reason. Further evidences in the form of photographs taken during a trip to Paris, France and another video of her dancing with her husband.

Milligan was able to amass 539,907 UK pounds from all of the disability benefits she had received.

Judge Howard Crowson told her during the sentencing, “You were sitting clapping your hands and clicking your fingers in time with the music having told us your arms were essentially useless.”

The judge continued, “It was quite incredible to see you stepping swiftly from a chair and dancing with your husband. You portrayed yourself at the trial as the victim - a person wronged.”

Sue Hirst, the prosecutor, argued, “It was accepted that she did have health problems but her physical capabilities improved over time. She stated that she could not get in or out of the bath without assistance, that she needed help getting dressed and needed assistance getting up and down stairs.”

She continued, “In the video footage, she can be seen dancing with full use of both arms having previously stated she was paralyzed down the left-hand side of her body.”

Hirst also said that Milligan didn’t disclose to the Hammersmith and Fulham Council that she owned two properties in Venezuela, her home country, another two in County Durham, and one in Luton.

Hirst added, “Officers searched her address and found that the top floor of the property had been converted and was set up as a beauty s treatment room with steep steps up to the loft.”

Andrew Stranex, Milligan’s defense attorney, argued, “She had continual contact with social services right through this whole process. She didn’t take the step in acknowledging ownership on her extra properties.”

Caroline Nokes, the minister for welfare delivery, said, “Defrauding the benefit system isn’t a victimless crime. It diverts money away from those who need it and cheats people out of the vital support they deserve.”

Nokes continued, “That’s why we pursue fraudsters relentlessly and try to recover the money they steal – to protect taxpayers and ensure our welfare system is there when people hit hard times.

“As this case shows, we’re protecting the system and cracking down on swindlers. Our message is clear; benefit fraud is wrong and will not be tolerated.”

Milligan went to her trial in a wheelchair. She denied all of the charges that were brought against her. She was eventually found guilty for dishonestly receiving a wrongful credit, obtaining services by deception, and evasion of liability by deception.