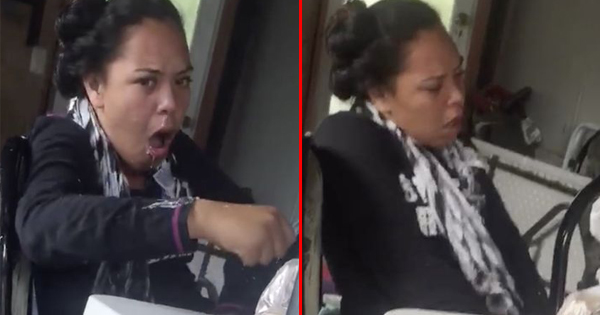 He Catches His Sister Acting Like A Zombie. When She Starts Making Strange Noises, He Knows Something Isn't Right.

A brother took a video of his sister experiencing the effects of a drug called Spice, which makes the user act like a zombie. Read on and watch the video!

Ngaetu Grover, 22 years old, was caught by her brother, Tuakeu, as she was experiencing the effects of a synthetic drug called “Spice.” Grover, who’s a mom of one child, took the drugs with her boyfriend, who can be seen in the video, the Daily Mail reports.

The video that her brother took was posted on Facebook and immediately went viral. Grover was caught slumped over a table slurring her words and seemed to have had vomited on herself. The effects of the drug make the person act in a zombie-like way.

Grover told Newshub, “It feels shaming, kind of. But the it feels like a good thing so, like, everyone can actually see what the actual effects of that drug does and hopefully it does help others getting off it.”

When asked why he chose to post the exposing video on Facebook, Tuakeu said that he wanted his sister to stop her addiction to synthetic drugs. Both of the siblings are from Auckland, New Zealand.

Tuakeu, said, “Most people think that I put it up to shame them or humiliate them. I put it up to put an image of our youth just to think what drugs look like and what it does to you so it encourages them just to say no to drugs.”

The video had been viewed 2.7 million times. Grover said, “Getting hooked on it is easy. But getting off it is the most difficult part. The way I was growing up, it isn't like how I am now - like how I've gone towards this path. I didn’t think that I would’ve chosen this path that I went down.”

Tuakeu wrote on the post with the video on Facebook: “I know a lot of people won't agree that I put it up because it is my sister but I don't care, I'm f****** sick of seeing our youth do this s*** and tired of our youth doing nothing better... sorry.”

“Spice” has been known for causing its users to act like zombies in the film. It makes them stupid, as in mentally and physically blocked. It is from a synthetic cannabis and is extremely potent, according to the Daily Mail. It could also be infused from bath salts.

Grover told The Hui, “I didn’t think I was like that—I was scared. That’s how I get and that’s what I’m like. I didn’t know that was the effects I was getting.”