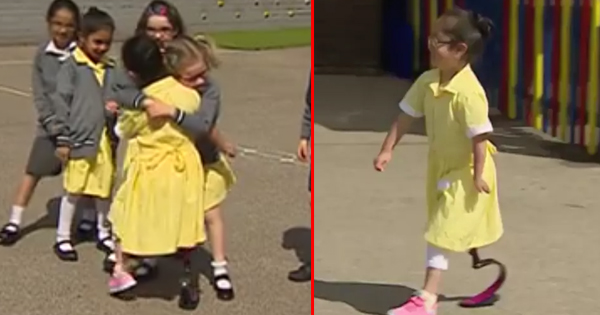 A little girl is so excited to show her schoolmates her new prosthetic leg that will allow her to move around easier and faster. Read on for the full story!

A little girl named Anu, seven years old, lives in the United Kingdom. When she was born, one of her legs had to be amputated due to an unreported reason. Although she has a regular prosthetic leg that she wore for day to day, she had a special sports blade made just for her, according to BBC Midlands Today.

Anu’s favorite colors are pink and violet, so her new sports blade was definitely perfect for her. When she was asked what she loved about her new leg, Anu said, “It makes me run faster and do my street dancing faster.” Anu said that it is comfortable because of a sock that was lined inside the blade.

Due to the success that the UK Paralympics had garnered and achieved last year, the government made a promise to fund 1.5 million pounds for organizations that focused on helping children in the same condition as Anu. However, these kinds of prosthetics need to be replaced every two years, and the allocated fund would be emptied out by next March.

Anu’s father said, “Whatever best is possible for the kids, every parent will give their best. If it means selling out the property or selling out something, they will try to give all that facilities, what a kid needs to become a normal kid and get into the normal life.

“Being a parent is my responsibility to give her all sorts of facilities what a kid would expect to stay attuned in the normal life.”

Macy, seven years old, from Shropshire, was one of the first kids to receive a prosthetic blade in England paid for by the National Health Service. Each leg could cost in between $2,000 to $5,000.

“The criteria set out by the department of health which you have to adhere to. Also, children themselves may not be big enough, they might be too small, or not heavy enough. The children obviously have to be fit on well to be able to be considered for the sports prosthetics.”

Anu went back to her school and showed her schoolmates her new pink blade. Some of her friends hugged her and joined them to playing in the playground.

According to The Independent, Open Bionics, a company based in Bristol, struck a deal with Disney’s technicians and designers two years ago to create robotic hands for children and making them more fun by inserting Disney and Marvel themes.